Daniel 12:1-4. “At that time shall arise Michael, the great prince who has charge of your people. And there shall be a time of trouble, such as never has been since there was a nation till that time. But at that time your people shall be delivered, everyone whose name shall be found written in the book. And many of those who sleep in the dust of the earth shall awake, some to everlasting life, and some to shame and everlasting contempt. And those who are wise shall shine like the brightness of the sky above; and those who turn many to righteousness, like the stars forever and ever. But you, Daniel, shut up the words and seal the book, until the time of the end. Many shall run to and fro, and knowledge shall increase.”

If there’s going to be an angelic advent there’s no better angel to have show up than Michael. Daniel’s vision reveals Michael delivering the people of Israel from a time of great trouble. Michael the archangel, the great prince, the protector of Israel, defeater of the Prince of Persia, wrestler with Satan, defender of Heaven, conqueror of the Dragon. Michael whose name asks and whose actions answer the question, “Who is like God?” 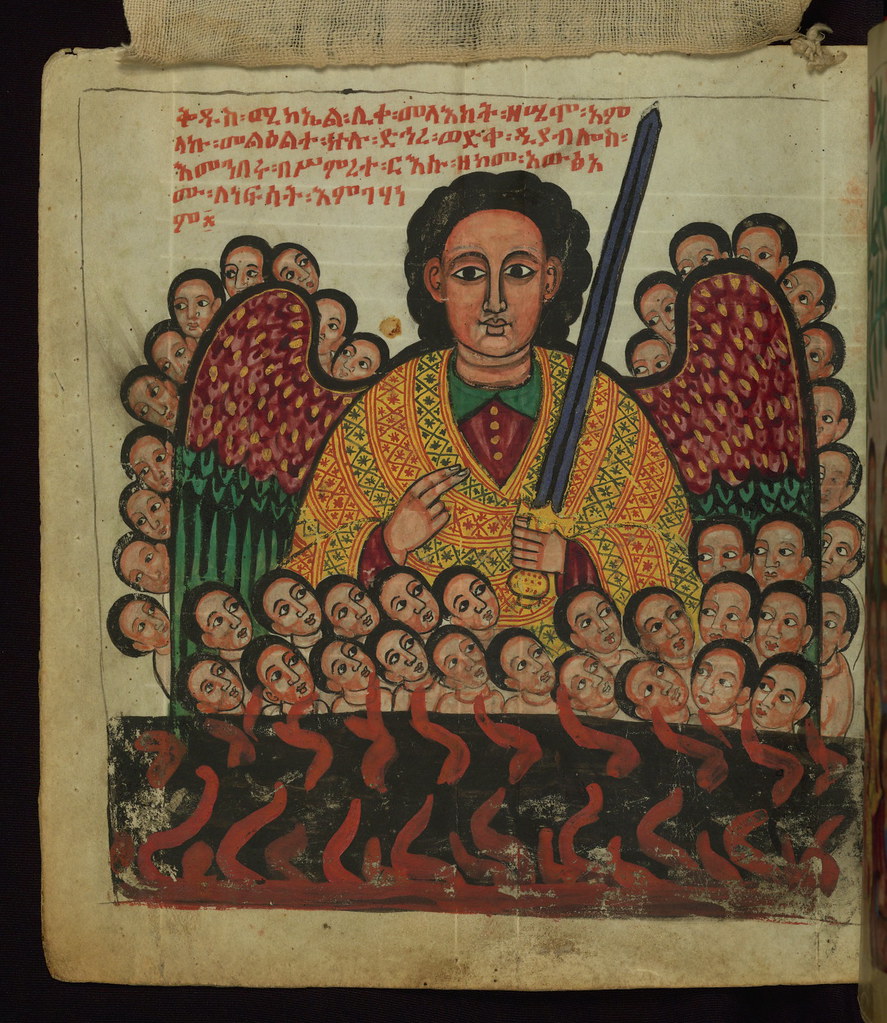 When you see all the times God has come to rescue his people in the Bible, all the angelic advents, one after the other, it may be tempting to see time and history as cyclical. Repeating the same thing over and over forever. But the scripture actually presents us with a more unique view of history. God’s history has a definite beginning and a definite end. An end marked by a time of trouble. A great war. The war we are all now living in the shadow of. The final battle between God and his enemies.

But it is also an end that becomes a new beginning. A rebirth. A resurrection – many of those who sleep in the dust of the earth shall awake, some to everlasting life, and some to shame and everlasting contempt.

This speaks to a final judgment of mankind by God. A judgment revealing only two categories. Eternal honor and life. And eternal death and abhorrence.

It’s a stark contrast requiring a decision by each and every one of us. It’s a decision that will be revealed in what Daniel calls the advent of the Son of Man.

and behold, with the clouds of heaven
there came one like a son of man,
and he came to the Ancient of Days
and was presented before him.
And to him was given dominion
and glory and a kingdom,
that all peoples, nations, and languages
should serve him;
his dominion is an everlasting dominion,
which shall not pass away,
and his kingdom one
that shall not be destroyed.

You see, it is not the arrival of the archangel Michael that we must acknowledge. It is the arrival of Jesus Christ. Your eternal destiny is decided by him alone.

John 5:25-29. “Truly, truly, I say to you, an hour is coming, and is now here, when the dead will hear the voice of the Son of God, and those who hear will live. For as the Father has life in himself, so he has granted the Son also to have life in himself. And he has given him authority to execute judgment, because he is the Son of Man. Do not marvel at this, for an hour is coming when all who are in the tombs will hear his voice and come out, those who have done good to the resurrection of life, and those who have done evil to the resurrection of judgment.

God’s final advent requires dealing with Christ, the Son of Man, given all authority to execute judgment. The One to whom God has given the power of life itself. The power to resurrect the dead. A resurrection unto life or a resurrection unto judgment.

This means that Christ’s response to you in his final advent is determined by how you respond to his first advent. The baby Jesus. The crucified Jesus. The resurrected Jesus. The glorified Jesus. How have you judged Jesus?

Is he an add-on to your life? Is he your teacher? Your moral guide? Your life coach? Your example of love?

Or is he just a legend? A myth? A religious construct?

Or maybe he’s your enemy. A nemesis. Some cosmic parole officer?

None of these will do. Jesus IS your judge. The judge of all that is good and evil. The decider of life or death. A judgment that no one will pass through unharmed without the saving grace of this same Jesus.

You see your judge took your judgment. Your destroyer was destroyed for you. Your life giver lived in your place and died in your place so that you might live eternally. This is the truth of his first advent. His arrival to earth not to judge us for our sin, but to save us from our sin.

Receiving Christ as both your Savior and your Judge means receiving the advent of his  life into yours. The power of both of Christ’s advents in you. The power of an everlasting guilt free life. A life of no condemnation. A life of shining like the brightness of the sky above.

Are you relating to Christ today as Judge? As savior? If you died today would you be resurrected to everlasting life or to everlasting contempt? How can you shine life the brightness of the sky this Christmas season?