Daniel 3:24-28. 24 Then King Nebuchadnezzar was astonished and rose up in haste. He declared to his counselors, “Did we not cast three men bound into the fire?” They answered and said to the king, “True, O king.” 25 He answered and said, “But I see four men unbound, walking in the midst of the fire, and they are not hurt; and the appearance of the fourth is like a son of the gods.”

26 Then Nebuchadnezzar came near to the door of the burning fiery furnace; he declared, “Shadrach, Meshach, and Abednego, servants of the Most High God, come out, and come here!” Then Shadrach, Meshach, and Abednego came out from the fire. 27 And the satraps, the prefects, the governors, and the king’s counselors gathered together and saw that the fire had not had any power over the bodies of those men. The hair of their heads was not singed, their cloaks were not harmed, and no smell of fire had come upon them. 28 Nebuchadnezzar answered and said, “Blessed be the God of Shadrach, Meshach, and Abednego, who has sent his angel and delivered his servants, who trusted in him, and set aside the king’s command, and yielded up their bodies rather than serve and worship any god except their own God.

As we’ve said many time before, advents are about rescue. Rescue from the evil kingdom of darkness that seeks to stamp out the kingdom of God. There is no more vivid picture of the great cosmic battle of these two kingdoms than the story of Shadrach, Meshach, Abednego and the fiery furnace.

Daniel 3 begins with a command from king Nebuchadnezzar that would effectively wipe out all who belong to God’s kingdom.

Daniel 3:4-6. “You are commanded, O peoples, nations, and languages, 5 that when you hear the sound of the horn, pipe, lyre, trigon, harp, bagpipe, and every kind of music, you are to fall down and worship the golden image that King Nebuchadnezzar has set up. 6 And whoever does not fall down and worship shall immediately be cast into a burning fiery furnace.”

Anyone who doesn’t worship the giant statue of Nebuchadnezzar will be thrown mercilessly into the fiery furnace. Every Yahweh worshiper gone. The kingdom of God destroyed.

But somehow Daniel 3 ends with a complete reversal of this program by King Nebuchadnezzar.

Daniel 3:29. Therefore I make a decree: Any people, nation, or language that speaks anything against the God of Shadrach, Meshach, and Abednego shall be torn limb from limb, and their houses laid in ruins, for there is no other god who is able to rescue in this way.”

What caused this sudden, radical shift? What is it that thwarted Nebuchadnezzar’s (and Satan’s) kingdom of darkness and restored the kingdom of God?

An advent. An angelic advent. A son of the gods in the flames.

Satan wants to destroy in the flames all who would claim the kingdom of Yahweh. But our invincible God cannot be burned. And any who experience the advent of God into their lives are invincible too.

Isaiah 43:2. When you pass through the waters, I will be with you; and through the rivers, they shall not overwhelm you; when you walk through fire you shall not be burned, and the flame shall not consume you.

Shadrach, Meshach, and Abednego trusted this promise of God. They trusted in God’s rescue either in their living or in their dying. And because they trusted God’s rescue, they could risk it all to follow him. Even into the flames.

Daniel 3:16-18. 16 Shadrach, Meshach, and Abednego answered and said to the king, “O Nebuchadnezzar, we have no need to answer you in this matter. 17 If this be so, our God whom we serve is able to deliver us from the burning fiery furnace, and he will deliver us out of your hand, O king. 18 But if not, be it known to you, O king, that we will not serve your gods or worship the golden image that you have set up.” 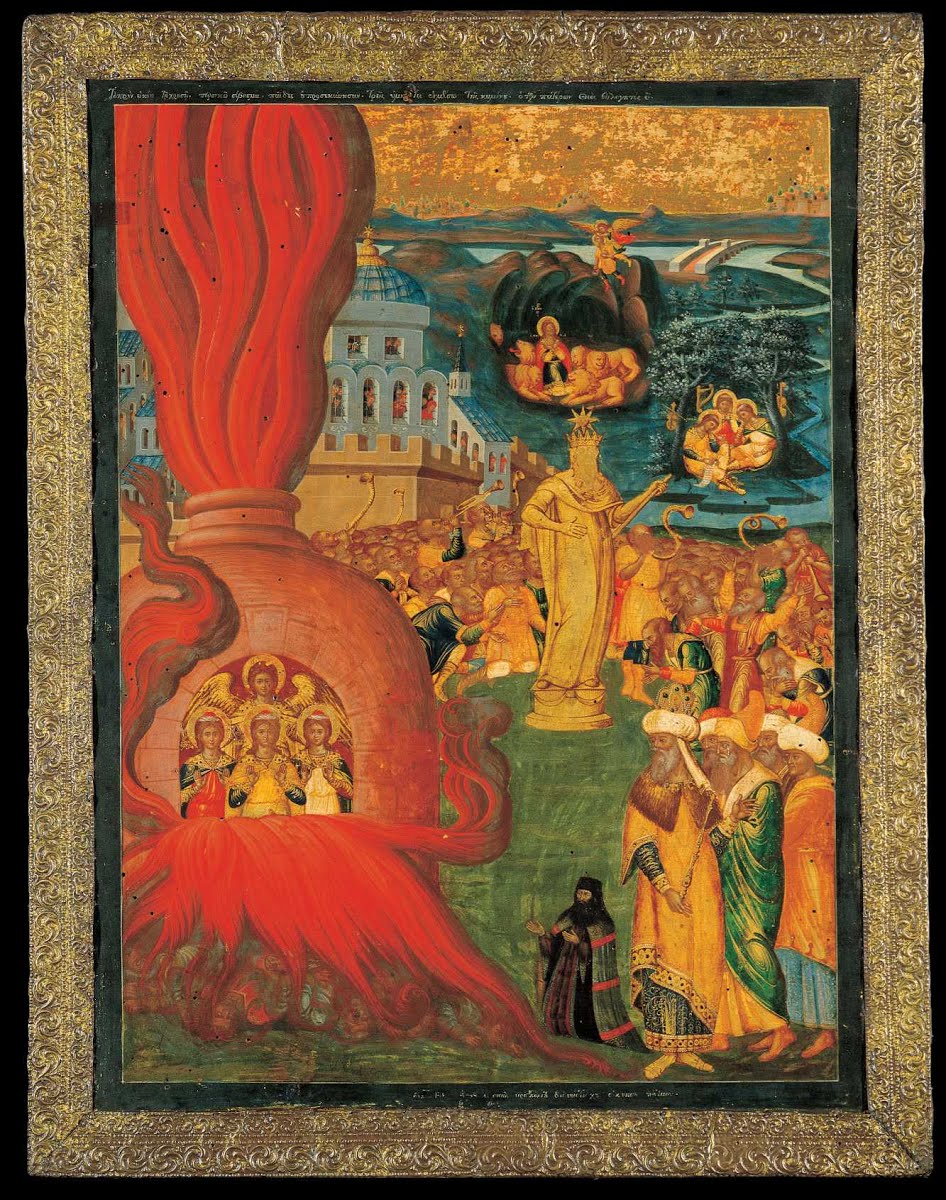 The Story of Daniel and the Three Youths in the Fiery Furnace (c.1725), Adrianoupolitis Konstantinos.

This story of Shadrach, Meshach, and Abednego serves as a glimpse into the great cosmic war happening since the beginning of time. The war between the kingdom of darkness and the kingdom of light. A war that God wins by his advent into the fiery furnace. His presence in the flames.

Two thousand years ago the advent of God as a baby brought his invincible life into our fiery furnace of death. Satan’s kingdom seeks to throw into the furnace all who would choose the kingdom of God over his own. But just like in Nebuchadnezzar’s fiery furnace, there is another man. A fourth man. A man walking in the midst of the fire with us. A man who has unbound his people. A man who isn’t just like a son of the gods, but a man who IS the Son of God. An invincible man who, on the cross, passed through the fires of hell for us, but who, by his resurrection, came out with his hair not singed, his cloak not harmed, and with no smell of fire upon him. A complete and total victory over death!

For us, the advent of Christ into our hearts has united this fire proof life to ours. His invincible life is now our hope. The kingdom of darkness that once ruled our lives has been destroyed and we have, by grace through faith, been brought into the kingdom of God’s dear son.

Now, even though we still live in the kingdom of darkness, the kingdom of darkness does not live in us. The kingdom of God does! Now, we never walk alone in the fires of this life. The fourth man is always with us. Jesus, the Angel of the Lord, was sent to deliver us. To unbind our minds and free us to walk in him. Now, like Shadrach, Meshach, and Abednego, we can face whatever life throws our way. We can choose to serve and worship no other god but our God. The God who delivers us all by his advent here.