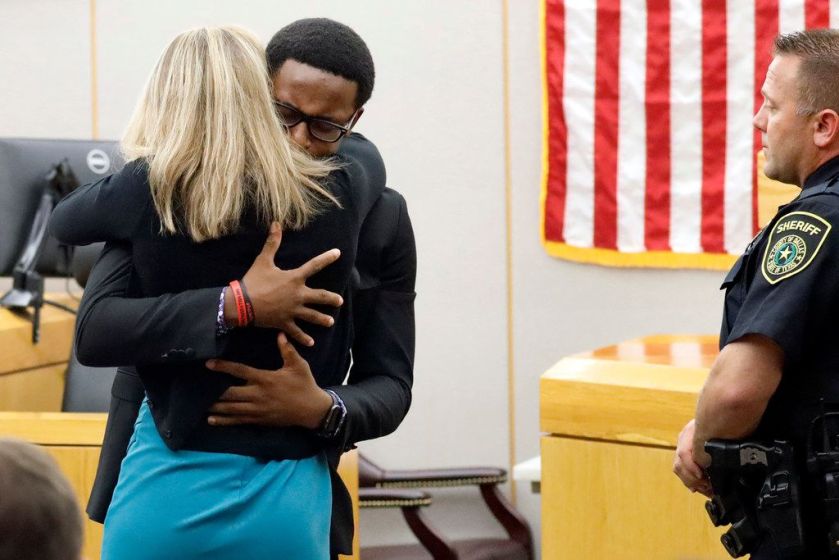 (Here’s something I wrote for my church. We will return to Exodus tomorrow).

As most of you from Grace are aware we spent the summer exploring Romans 12 in a preaching series entitled Love Your Enemies. From this series we tried to make sense of some of the hardest of Christ’s teachings including teachings on forgiveness and justice.

This past week we were given a vivid look into the power of forgiveness when Brandt Jean chose to forgive the killer of his older brother, Botham. Botham was shot and killed horrifically in his own apartment by an off duty police officer named Amber Guygur. Guygur was convicted and sentenced to 10 years in prison. In his victim impact statement offered to Guygur in the courtroom, Brandt Jean chose to offer forgiveness to Amber. It is truly one of the most powerful and heart wrenching scenes you will witness.

I know much has been said about this already, but I feel that it is important for me to briefly point our attention to this story especially in light of where we have been as a church and where many of you have been as individual followers of Christ.

I also know that some of have been critical of Brandt Jean’s forgiveness of Guygur. Some feel the black community (especially black Christians) are forgiving too soon. Others feel that white Christians expect forgiveness without a cry for justice.

An African-American church member and I were texting about Jean’s statement the other day and he said this, “Many in my community don’t like it because they justly feel that black people have given too much and been discriminated against too long… Even I couldn’t understand why he hugged her until I remembered what the young man said ‘I have forgiven you.’ Wow! Is that what it looks like? It seems to be something from a different world.”

And that’s it exactly.

It is something from another world. What we have witnessed from Brandt Jean is shocking. Offering love, forgiveness, and compassion to the very person who brought such horror and pain to your life. And not only for his own personal peace of mind but also for the cause of Christ, to the glory of God.

This kind of forgiveness will always bring resistance with it. Why? Because it appears to be weakness. And it appears to forget justice.

But isn’t weakness what the gospel calls us to embrace? And when we do embrace it, we find supernatural power in Christ. Even the power to forgive in the most devastating of circumstances. How? Because Brandt Jean’s hope is not in the power of revenge. His happiness is not found in Guygur’s misery. It doesn’t need to be because he has a hope beyond this life. Now what looks like weakness to the world can actually be a weakness unto the greatest of power. The power to love your enemy.

These are important questions, but those who think that forgiveness eliminates the need for justice do not understand forgiveness or justice. And need to take a closer look at the cross.

At the cross God’s demand for righteousness and justice was satisfied in the death of Christ. Every sin forgiven, every crime absolved. This propitiation allows God to deal with us with restorative justice not just punitive justice. His first move is not to destroy us (and with us our sin) but to restore us, to lift us up, to make us righteous.

Which is exactly what Brandt did in that courtroom.

Here is where it is so important to understand the nature of restorative justice though. Restorative justice does seek reconciliation, but it also demands restitution. It rejects revenge while seeking what is best for the community, which may be a guilty verdict and a prison sentence.

The truth is if we wait to forgive until human justice has occurred we will never forgive. Human justice will always fall short at best and completely fail at worst. But God’s perfect justice demonstrated in the person and work of Christ on the cross allows for those who claim Christ to both forgive and seek justice. To love mercy while doing justice. But only if we are willing to first walk humbly with God.